How To Act Completely Unprofessionally Many of you have been following the MondoTunes drama on Twitter (here), (here) and (here). I reviewed them (and 6 other digital distribution services). Before I posted my full report, the founder, Steve Norris sent me a looooong email trashing the other services. I ignored it and thought, “well, maybe they slept with his girlfriend…many times” I’ll let that slide. I didn’t care what his (obviously biased) opinion was on the other services. Then once I posted my article, many suspicious, very pro-MondoTunes (and anti-others) comments started popping up on the article. I didn’t realize this until a user pointed it out. I did some IP investigating (on my iPhone in the airport) and discovered that at least two of the pro-MT comments were from the same IP address (with fake names). They looked and sounded similar to Steve’s comments/emails (and the IPs looked the same – from my quick iPhone scanning before boarding) so I called him on it in the comments. Then I rechecked the IP addys juuuuust to make sure that they were actually identical and discovered that no they were in fact different from Steve’s so I deleted my comment inferring it was him because I couldn’t verify it.
+CD Baby, Tunecore, Ditto, MondoTunes or ReverbNation

Then I got on the plane.

As the flight attendant was sweeping the aisle getting everyone to put their phones in airplane mode I got a FURIOUS email from Steve IN ALL CAPS threatening to sue me for slander if I didn’t remove the comment (it was already down) “within 30 minutes.” I quickly responded to his email stating that the comment was down and that I didn’t appreciate the threat. Then we took off.
+Don’t Be A Dick

What have we learned from this (other than don’t work with MondoTunes)? Don’t speak negatively of others in your field – it reflects poorly on YOU.

Far too often bands in the same scene will trash other bands behind their backs. What they don’t realize is that they aren’t hurting the other bands’ reputation, they’re actually hurting their own! No one wants to hear negativity.
+The Gatekeepers

If a band has seriously rubbed you wrong, rise above and be the bigger party. If you walk around with a giant chip on your shoulder no one is going to want to work with you. If you badmouth and trash talk every other band, no fan is going to want to be associated with you. Don’t think your private conversations won’t get out. People talk. And if you get into the habit of trash talking, you will slip when you’re in front of the wrong person.
+I Think You’re An Asshole, So I’m Going To Tell You. Asshole

However, if you are a positive energy in your scene and support the other bands (go to their shows!), then people will take notice and want to be associated with you. You’re never too cool to support other bands. Positivity is contagious.
+Be A Supportive Member Of Your Music Community

This is true for every industry.

Let your work speak for yourself. Trash talking only reflects extreme insecurity.

**Update I now have hard evidence that MondoTunes had been writing the pro-MondoTunes comments with fake names. 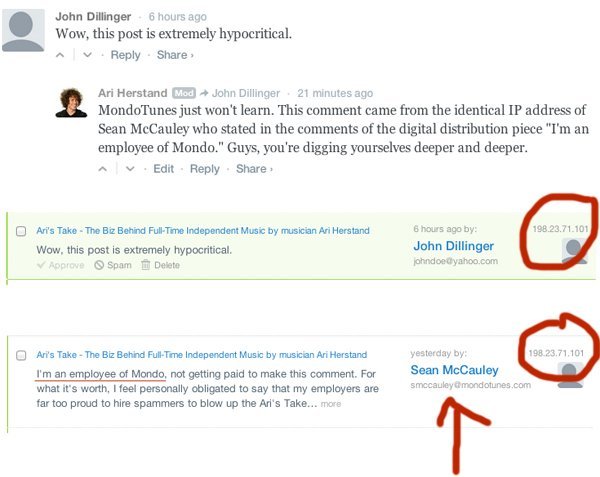 Previous article8 Ways To Get The Best Deal For The Gig
Next articleDon’t Be Late. Ever.